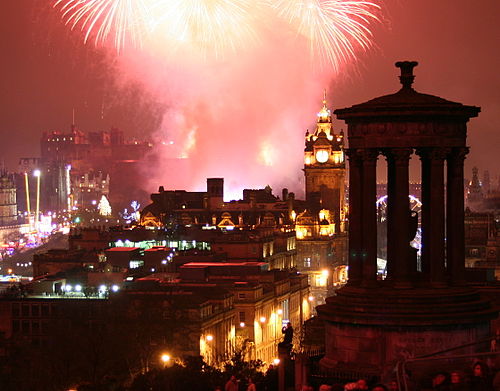 Hogmany is the Scots term for New Year's Eve (le réveillon du premier de l'an).  In the Scottish culture, generally Hogmany is a bigger and more important event than Christmas Eve (le réveillon de Noël).  This may be a consequence of the Protestant Reformation and in particular the Presbyterian Church of Scotland (as opposed to the Roman Catholic Church or Anglicans).  Origins of Hogmanay are not entirely certain but are generally believed to originate from Norse and Gaelic customs surrounding the winter solstice.

The winter solstice is the point in the Earth's orbit where the northern hemisphere is furthest away from the Sun, due to its axial tilt (or "obliquity").  As many may know the axial tilt of the earth is about 23.4º and it remains constant pointing more or less to the star known as Polaris.  The period of the orbit is known as a year.  The image above shows the two solstices but there is also an intermediate state where the north and south poles are equidistant to the Sun - the vernal (or spring) and autumnal equinox.  "Equinox" means equal night.  For the solstices there is a direct connection to the midnight sun in the summer and the long periods of darkness in the winter. In many cultures the autumnal equinox relates to the harvest and the onset of winter, the winter solstice relates to the peak of the darkness, the spring equinox relates to planting and rebirth and the summer solstice relates to the peak of summer and light.

Many customs are associated with Hogmanay, including

New Year's Day is celebrated by Scots, usually with a steak pie.  Haggis, neeps and tatties are common as appetizers, along with cock-a-leekie soup.  Salmon may make an appearance too.  Winter vegetables are also common including beetroot, kale etc.  Desserts include cranachan, apple crumble or even some sort of pudding (that is a British pudding) with custard.